Are you interested in snowboarding or planning a trip? You’ll need to prepare some equipment for the activity; one of which is a snowboarding boot.

But what happens when you don’t have a snowboard boot, can’t afford to get one, or want to make do with some other boot you have?

Mountaineering boots for instance have been compared to snowboarding boots because of their similarities. However, they also have some notable differences.

So, the big question is ‘can you snowboard in mountaineering boots?’ The answer is Yes! You can. But not without some measures in place.

To find out more, please read through.

Just as the nature of activities differ, the boots used for snowboarding and mountaineering are also different.

While there are some similarities between these boots, the difference between them is the reason you might find it hard to use them interchangeably; at least without some tweaks.

Let’s dive in to know more about the differences between snowboard boots and mountaineering boots.

But this doesn’t mean that mountaineering boots are light as a feather.

Mountaineering boots come in different ranges of weight, depending on the type you purchase.

On the other hand, all snowboarding boots are designed to be on the heavier side.

Snowboarding boots have more ankle support than mountaineering boots, especially because they reach as high as your calf and are designed to support you as you navigate the area when winter gets tricky.

Mountaineering boots come in different heights, and it’s left to you to choose the height you need.

Snowboarding boots are designed to deliver more traction because you’ll be walking in the snow and must avoid slipping and falling.

As for mountaineering boots, the traction you get varies depending on the quality of the boot as well as its purpose.

For instance, mountaineering boots designed for winter will likely have more traction than those designed for other reasons.

Finding a snowboarding boot that isn’t waterproof is a rarity because they are designed to protect your legs and ankles from getting wet from the snow during your hike.

Snowboarding boots also extend higher and have a protective cuff to keep the snow out and protect your legs from falling snow or rain.

On the other hand, not all mountaineering boots are waterproof, so you’ll need to confirm before you make a purchase.

Also, they don’t reach as high up on your calf as snow boots, and they lack a tight cuff for further protection.

However, you can also get several well-insulated mountaineering boots that can best some snowboarding boots.

Can You Mountaineer with Snowboard Boots?

Unlike what many people think it is actually possible to mountaineer with snowboard boots. However, it isn’t the most comfortable activity, and it could take quite some time as well.

To make your snowboarding boots adaptable for mountaineering, you might need to get crampons that you can strap on your boots.

Most people use strap-on crampons with their snowboard boots without issues. You can buy some if you’ll be using snowboard boots for mountaineering often. Otherwise, you can look for a place to hire crampons whenever you need them.

Apart from crampons, you can also explore with a split board to help you walk uphill better as it has a better grip and control.

Can You Snowboard in Mountaineering Boots?

Now, when roles are reversed, you might wonder whether mountaineering boots can stand their ground with snowboarding. The answer is YES!

You might also experience some pain because mountaineering boots are not as high in the back compared to snowboarding boots.

However, the pinching you might feel is bearable. If you can lay your hands on a higher boot than the high back, you will be more comfortable.

If you own leather mountaineering boots, you’ll need to stick to simply getting down the mountain a snowboard. However, you’ll be unable to make hard turns or do much carving with them.

You can make your mountaineering boots comfortable for snowboarding is to pad them up by filling your ankle area with a sleeping pad and probably reinforcing it with webbing straps to prevent them from falling off.

If you don’t have a difficult climb but technical or complex snowboarding down, then maybe you want to hike in your snowboard boots and also ride down in them for a more enjoyable experience.

If it’s a long hike up and you don’t want to be burdened with the weight of two boots and also the stress of changing from one boot to the next whether you’re up or down, then, a mountaineering boot with some support is better for you.

Simply ensure that the bindings are a perfect fit for the boot.

As far as products are concerned, you can get a great experience when you either use the Sportiva Spantiks or the Vasque ICE 9000s. However, the Spantik delivers a smoother and more enjoyable experience.

If you own mountain plate bindings, you can go snowboarding with Alpine touring boots. These lightweight boots work well for a range of activities, including snow ascents to traverse and descents.

You can also keep your eyes open for the mountaineering snowboarding boots made by Koflach that help you do both comfortably. Although the boots are no longer being produced, you might find someone interested in selling a used pair.

Snowboarding and mountaineering are both exciting activities, and it is great to know that you don’t have to get two separate boots for them if you cannot afford to.

However, if you have the money to spend, and if you engage in these activities often, it is always great to get both boots and enjoy them without needing attachments or tweaks.

Rappelling is an interesting sport, but don’t be mistaken; it has also one of the most dangerous sports out there. If something were to go wrong, accidents that occur from rappelling can be life-threatening so you must be very careful when engaging in the activity. You might be wondering ‘what is so dangerous about rappelling?’… 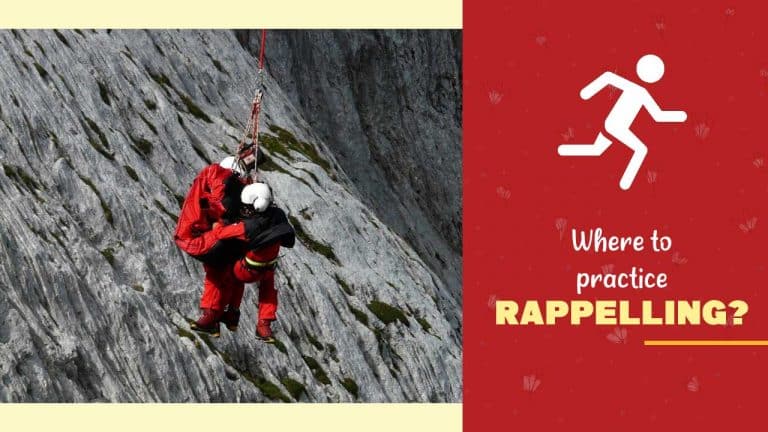 Many people see rappelling as an easy sport, so they don’t consider it necessary to engage in any practice before they actually go rappelling for the first time. However, rappelling is considered one of the most dangerous activities and one that is responsible for a good number of accidents owing to human errors, equipment faults,…

The thought of skiing in mountaineering boots might seem like a dangerous, impossible idea to you, but it is a question many people have asked, and continue to ask. What if you have mountaineering boots that you’ve invested a lot of money in, and you want to go skiing, but you don’t want to invest…

Sometimes, when you get a pair of mountaineering boots, they fit your feet perfectly and are comfortable from the first time you use them. However, sometimes they are so tight, stiff, and uncomfortable that you can’t enjoy using them until you do something about them. At this point, two things come to mind; stretching the…

Are you looking to buy a new pair of trekking poles but are not sure about suitable weight? Also, do you want to know if you need one pole or two? Read on, you will find answers to all your questions. Does trekking pole weight matter? Yes. It is important to take weight into account…

TheDailyOutdoors.com.com is a participant in the Amazon Services LLC Associates Program, an affiliate advertising program designed to provide a means for sites to earn advertising fees by promoting products you may be interested in.